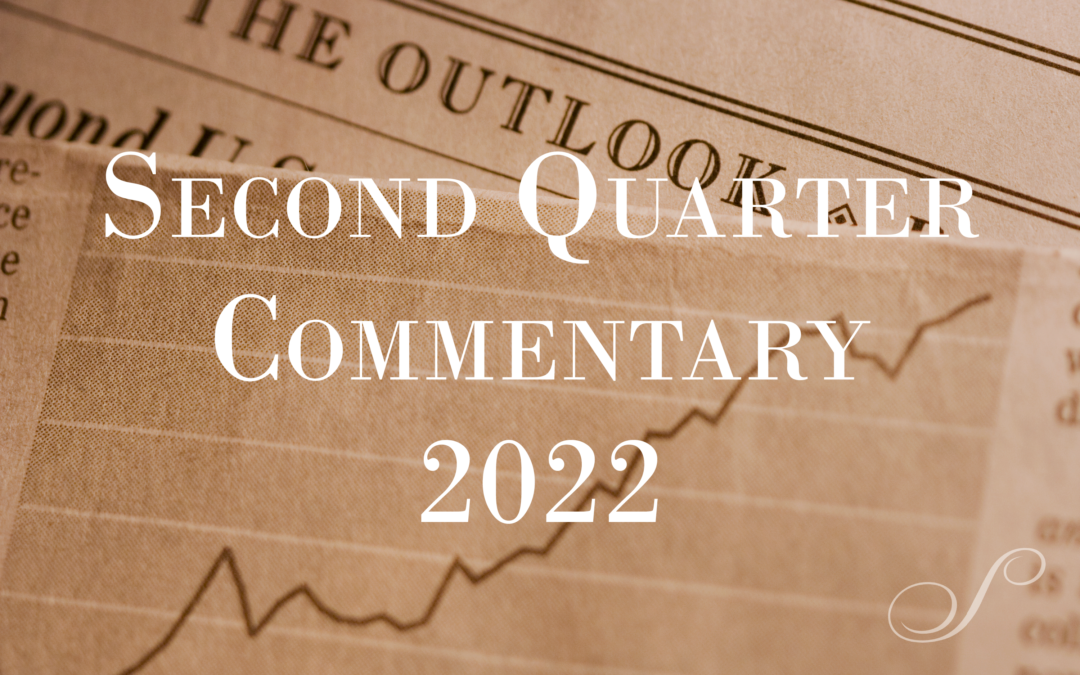 The second quarter was beset with continued weakness in the markets and a deterioration of sentiment and consumer confidence. The S&P 500 entered a bear market with a 23% drawdown, while the NASDAQ 100 fell 33%. The yield on the 10-Year treasury spiked to 3.43% resulting in a 13.2% decline in the US Aggregate Bond Index (let us remember that when interest rates increase, bond prices decrease). These extended losses were precipitated by a hotter than expected May CPI report along with a preliminary University of Michigan Consumer Sentiment report, which fell to its lowest recorded value since the series began in 1952. Furthermore, the report showed long-term inflation expectations increased to its highest level since 2008. These reports spooked the Federal Reserve (FED) and the markets, causing the bond market to price in two .75% rate hikes at the Federal Open Market Committee (FOMC) meetings, the first of which we saw on June 15th and the second is expected on July 27th. This raised the probability the US economy enters a recession and the equity markets responded by selling off an additional 9%.

The US economy grew 5.7% in 2021 and economic output is now back to where it was pre-COVID. Yet, economic growth contracted 1.6% in the first quarter, largely due to disruptions caused by the surge in the Omicron variant. While estimates for second quarter GDP vary, the Atlanta FED ‘GDPNow’ forecasts a -2.1% growth rate for the second quarter. The textbook “back of the napkin” definition of a recession is two consecutive quarters of negative GDP growth, so if second quarter GDP does come in negative, there will be much talk of the US economy already being in a recession. The labor market paints a different picture, however. Payrolls grew by 539,000 per month in the first quarter and 375,000 per month in the second, while there remains nearly two job openings for every unemployed person. The labor market has softened in the second quarter but by no means is representative of a recession. The National Bureau of Economic Research (NBER) has the responsibility of defining when a recession begins and ends, and we won’t know for sure until we are long on our way to recovery. For example, the NBER did not declare the 2020 COVID downturn a recession until July 2021.

We began the year with the notion that normalizing fiscal and monetary policy would cause the economy to slow and may lead to a recession in 2023 or 2024. In December, the FED forecast three or four .25% rate hikes this year, which would have brought the federal funds rate to .75% – 1% by the end of the year. At that time, they thought inflation would begin to moderate as supply chains came back online and COVID became less of an issue. Rather, we experienced disruptions due to the spread of the Omicron variant, more lock downs in China due to their Zero COVID policy, and the devastating war in Ukraine. This put continued upward pressure on inflation, which scared the FED and led them to become much more hawkish. We now expect another .75% hike in July, a .5% hike in September, and a .25% hike in November and December, which would bring the target Fed Funds rate to 3.25% to 3.5% by the end of the year. This aggressive policy will slow the economy and has increased the risk of recession sooner than previously expected which the equity markets are pricing in.

Inflation, and the FED’s reaction to it, remains the biggest issue facing the economy and the markets. In response to the pandemic, the Federal Government spent $5 Trillion which the FED monetized by purchasing bonds and Mortgage-Backed Securities to expand its balance sheet. This in turn increased M2 (the amount of money in circulation) by 40% which helped spur consumer demand. Not only did it fuel demand, but it did so at a time when consumer preferences shifted from services to goods and supply chains were constrained.

While the FED’s tools can curtail demand by raising the cost of borrowing to slow the economy, it has no influence over the supply side of the equation. We have begun to see some easing in commodity prices with the Bloomberg Commodity Index falling 15% since its June peak. Airfares have also appeared to have peaked and we’re seeing some improvement in food prices while the doubling of mortgage rates are slowing the housing market.

The two asset classes in the portfolio, which have been working well this year, are Real Estate (used more as an alternative to our other low risk investments) and Equity Alternatives. Real Estate has become overweight in the portfolio due to its positive performance and we are allowing it to remain overweight as it continues to perform well. We began increasing our exposure to Equity Alternatives in December and have increased that further this year by taking some risk off the equity side after periods of strength. We also moved to reduce our interest rate risk and credit risk on the low-risk side of the portfolio. This has resulted in a higher allocation to cash than we would typically hold because of a lack of quality low risk investments in this volatile environment.

While it has been a rough first half of the year for almost all asset classes and consumer confidence is as low as it’s ever been, let’s turn to some of the positives. We believe inflation will be more like post-war inflation than like that of the 1970’s. The same deflationary pressures that existed before COVID are still there. Trade unions are much weaker now than in the 70s, significant advancements in information technology improves productivity and makes markets more competitive, and we have more income inequality (50% of the income goes to the top 10% of households who tend to invest it rather than spend it on goods and services, which tends to keep inflation low). The four cyclical sectors of the economy that tend to go boom to bust are not in boom territory. Banks, consumers, and corporate balance sheets are healthy so we shouldn’t see a major deleveraging. While these may not be all positives from a social perspective, they put downward pressure on inflation over the long run.

In conclusion, recession risks have increased, but should one occur, we hope it will solve some of the problems we face in the economy, and return a pre-COVID normal of low inflation, slow and steady growth, low interest rates and high profitability. The equity markets have already largely priced a recession in, and sentiment is so poor that we feel there is probably upside potential downside risk. We do expect volatility to continue while we await more clarity on inflation, the war in Ukraine and a downturn. Should we see a positive improvement in any of these areas, we would expect a healthy rally in the market. If it takes one year for the S&P 500 to return to its January 3rd, 2022 high, that will result in a 24.7% gain, while if it takes three years that would still yield an 8.9% annualized return.

Please know we are here to help during this time of uncertainty and are available to answer any questions or concerns you may have.

Take care and be well,

Please remember that past performance may not be indicative of future results.  Different types of investments involve varying degrees of risk, and there can be no assurance that the future performance of any specific investment, investment strategy, or product (including the investments and/or investment strategies recommended or undertaken by Socha Financial Group, LLC (“SFG”), or any non-investment related content, made reference to directly or indirectly in this commentary will be profitable, equal any corresponding indicated historical performance level(s), be suitable for your portfolio or individual situation, or prove successful.  Due to various factors, including changing market conditions and/or applicable laws, the content may no longer be reflective of current opinions or positions. Moreover, you should not assume that any discussion or information contained in this commentary serves as the receipt of, or as a substitute for, personalized investment advice from Socha.  Please remember to contact Socha, in writing, if there are any changes in your personal/financial situation or investment objectives for the purpose of reviewing/evaluating/revising our previous recommendations and/or services, or if you would like to impose, add, or to modify any reasonable restrictions to our investment advisory services.  Socha is neither a law firm, nor a certified public accounting firm, and no portion of the commentary content should be construed as legal or accounting advice.  A copy of the SFG’s current written disclosure Brochure discussing our advisory services and fees continues to remain available upon request.

Historical performance results for investment indices, benchmarks, and/or categories have been provided for general informational/comparison purposes only, and generally do not reflect the deduction of transaction and/or custodial charges, the deduction of an investment management fee, nor the impact of taxes, the incurrence of which would have the effect of decreasing historical performance results.  It should not be assumed that your Socha account holdings correspond directly to any comparative indices or categories. Please Also Note: (1) performance results do not reflect the impact of taxes; (2) comparative benchmarks/indices may be more or less volatile than your Socha accounts; and, (3) a description of each comparative benchmark/index is available upon request.

Please Note: Limitations: Neither rankings and/or recognition by unaffiliated rating services, publications, media, or other organizations, nor the achievement of any designation or certification, should be construed by a client or prospective client as a guarantee that he/she will experience a certain level of results if Socha is engaged, or continues to be engaged, to provide investment advisory services. Rankings published by magazines, and others, generally base their selections exclusively on information prepared and/or submitted by the recognized adviser. Rankings are generally limited to participating advisers (see link as to participation data/criteria, to the extent applicable). Unless expressly indicated to the contrary, Socha did not pay a fee to be included on any such ranking. No ranking or recognition should be construed as a current or past endorsement of Socha by any of its clients.  ANY QUESTIONS: SFG’s Chief Compliance Officer remains available to address any questions regarding rankings and/or recognitions, including the criteria used for any reflected ranking.